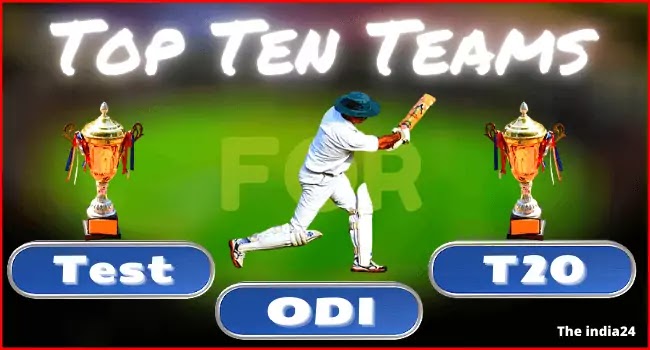 As per the points and ratings were given by the ICC, a ranking list is generated for the teams of all countries, this list is produced separately for all three formats of the cricket game.

Here is a list of the latest Top Ten Teams of World Cricket which is generated by ICC for all three formats of cricket game.

The Latest Top Ten Teams for the Test:

The first Test match in the history of cricket in the world took place between Australia and England from 15 to 19 March 1877 at the “MCG” Melbourne Cricket Ground in Australia. 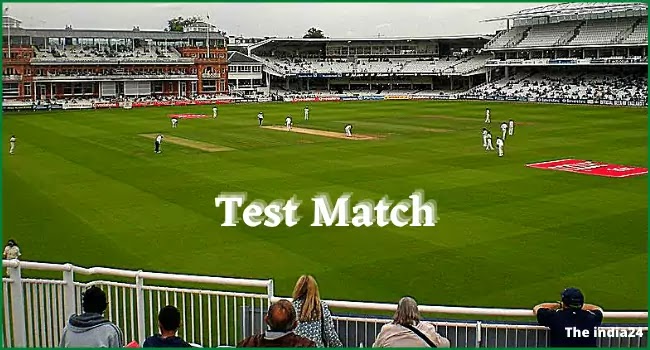 
The Latest Top Ten Teams for the ODI:

It is played only during the day, or day and night. There is no break between innings. The game ends after the stipulated number of overs is completed.

This cricket format involves two teams of 12 players, each facing off against the other. In this format, each team has only one inning per match and is declared a win,  loss, tie, or draw game. the game can last anywhere from 1 hour and 30 minutes to 2 hours and 30 minutes.

In the world, the first one-day international (ODI) match was held on 5 January 1971 between Australia and England at the Melbourne Cricket Ground (MCG) in Australia.

In this ODI, England scored 190 runs while batting first, in response, Australia achieved the target easily by losing their 5 wickets and won this first ODI.

The story of the origin of the one-day cricket format is very interesting when the third Test match between Australia and England started in 1971.

It started raining three days after the start due to which the ICC officials Decided instead of canceling this Test, to convert it into a 48-over single innings game and since then the game of ODI has been started 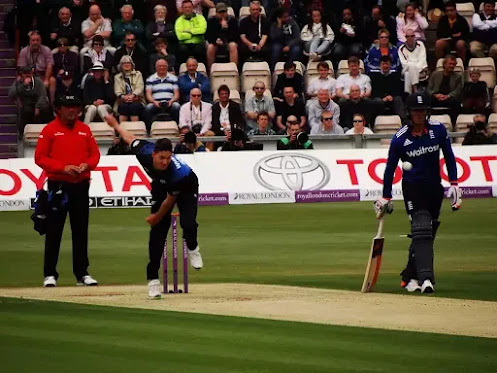 The Latest Top Ten Teams for the T20:

The T20 cricket format was introduced at the international level in 2003. This type of match is shorter than ODI matches, and a total of 11 players from each team are on the field.

These matches usually last for a maximum of 20 overs and last until the winner emerges. If the match ends in a draw, extra time or extra play of balls is added to decide the match-winner.

The world's first T20 International matches were held on 17th February 2005 between Australia and New Zealand at Eden Park in Auckland, the city of New Zealand.

The first World Cup of the T20 International match was started on 11 September 2007 at Wanderers Stadium in Johannesburg of South Africa.

India won this first World Cup by defeating Pakistan by 5 runs in the last over of the match in a thrilling game of the finals of this World Cup, Which has not been forgotten to date? 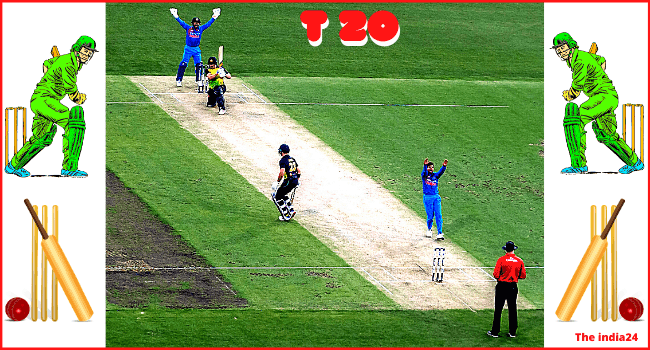 Cricket has been originated around the 1870s and was originally developed by English county sides as a way to determine their dominance over other counties in England. Since then, the sport has spread around the world and has become a major focus of sports culture everywhere.

This format of the game involves two teams from opposing countries, in which one team tries to score runs by hitting balls bowled by the bowlers of the opponent's team with the bats of their batsmen. The game is put into execution by four kinds of characters on the playground ie. batsman, bowler, wicket-keeper, and fielder.

Cricket is played on a cricket pitch that has boundaries, wickets (bails), and a playground. Each boundary extends from the edge of the pitch to the end of the wicket line.

A batsman starts his innings standing at the crease when he hits the ball with a bat called a bat. In this case, you will need to use your left hand to hold the bat. Your right hand can either keep the bat raised above your head or below your chin depending on what kind of shot you are going to hit. You will always have to face the bowler to begin your innings.

If you try to stand facing away from the bowler's direction, then you will not get enough time to react to the ball and make sure you swing the bat. When you are ready, swing the bat down and through the air. As soon as you have swung the bat, put it back into the ground behind you so that you can move forward after the ball bounces off the bat.


👉Types of Bowling in Cricket


👉Biography of MS Dhoni
👉Follow my blog with Bloglovin